Ninety to 100 points an hour – that’s how fast Jeff Gerber and the surveyors of Clark Builders typically move when they’re on a project doing layout. The top-ranking general contractor, based in Edmonton, Alberta, Canada, delivers buildings and structures in the industrial, commercial, and institutional sectors, and concrete layout work is a key area of focus. Within the last year, the team has streamlined their layout time by 25 to 30 percent after adopting the latest generation of Leica iCON robotic total stations, GNSS and software. “We’re all rock stars in our old way of doing layout, but the ‘iCON way’ is so much more efficient, so much more intuitive,” Gerber said.

Gerber, who is the company’s head surveyor, said Clark Builders first adopted robotic layout seven years ago using another brand of technology. Although the first set of robots increased their speed compared to manual methods, the technology was complex and required pressing multiple buttons in the right combination to accomplish a simple point layout. Transferring data from the field to the office required importing and exporting between a third-party software. Training involved weeks of trial and error, and field surveyors needed a high level of experience and expertise to do the job right.

As building projects became increasingly elaborate, with more angles, curves and slopes, Gerber kept pushing the envelope, trying to find a better way to get the job done. One day, while he was working on a three-level parkade, Courtney Gehring from Mountainview Systems stopped by to show him the Leica iCON Robotic Total Station. “I was blown away by the iCON’s ability to do surfaces easily, as well as its ability to do point and line layouts,” Gerber said. “This was the technology we had been waiting for.” 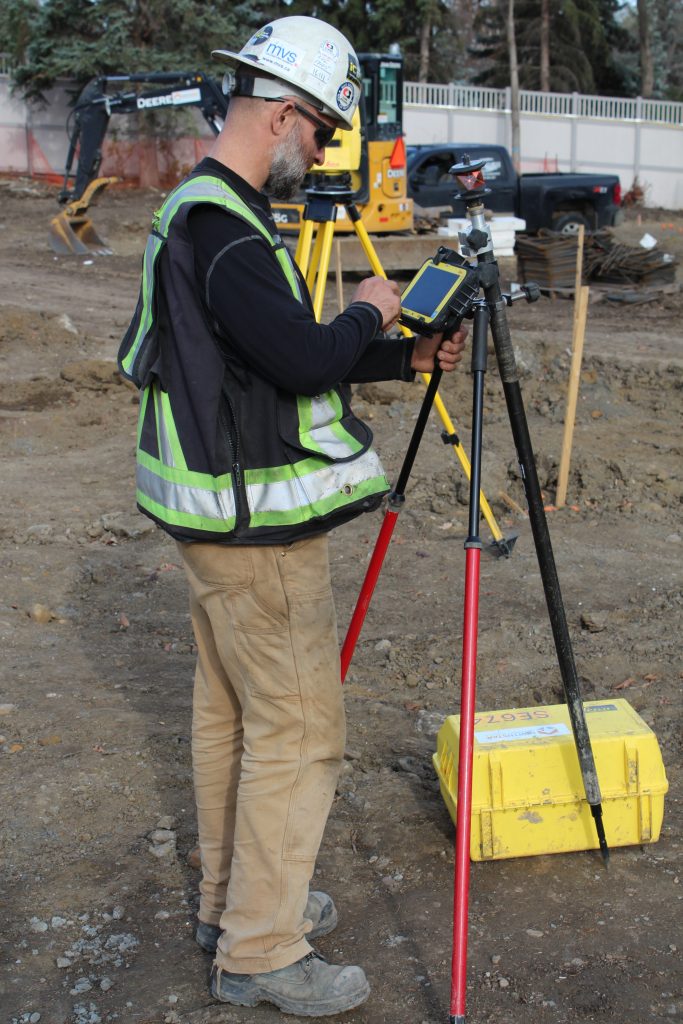 In a matter of days, Gerber mastered the iCON workflow. Impressed with the simplicity, he spent the next several months building a business case for his firm to invest in the technology. As he finished up the three-level parkade, he used the iCON on half of the structure and his previous robot on the other half, carefully tracking the amount of time required to lay out columns and slab beds, set the tables and pour the concrete. It was a complicated project, with the tables and concrete sloped in all directions. The efficiency gains with the iCON were significant, Gerber said.

On another project, Gerber had to lay out HVAC core hole locations through a concrete slab under every seat in a theater. With his previous robot, Gerber was able to lay out a maximum of 50 or 60 points per hour in this type of application. “With the iCON, I was easily getting 80 an hour plus at high accuracy, and that was in the first two months with the technology,” he said.

The documented improvements made it easy for the Clark Builders’ management team to justify a complete fleet upgrade. The company purchased six iCON robotic total stations, an iCON GNSS smart antenna, and the iCON build software. After a two-hour training session, the team was confident and ready to use the technology on the job. “It was instant, let’s go,” said Gerber. “There was no hesitation; everybody was all in.”

Ease of Use Generates a Fast ROI

Ease of use was a key selling point for Clark Builders. Gerber compares the iCON solution to the latest generation of consumer smartphone technology. “Moving from our previous robots to the iCON was like going from a flip phone to an iPhone,” he said. “They both do the same operation, but with the iCON it’s so much easier to do the same tasks and more. We just tap once and we’re going. Same thing with lines—just tap on the line, and we’re doing it. It’s very simple yet very powerful.”

Moving the data between the field and office is also much easier. The team saves AutoCAD or Revit files as a DXF, with no additional imports or exports required. Points are overlaid perfectly on the drawings, which provides valuable information in the field. “The software automatically creates points at the ends of lines and centers the circles,” said Gerber. “We just save it as a DXF and go.”

Transferring field data to the office is also easy, Gerber said. The team simply exports a CSV or DXF file from the tablet and loads it into AutoCAD or Revit as required.

Because of the faster and easier workflow, Gerber estimates the company now spends 25 to 30 percent less time on every project, which directly impacts the bottom line. “Our survey costs are lower because we’re not onsite as long, and the risk of rework is practically eliminated because of our high accuracy,” he said. “Plus, our ability to provide the layout in a timely and accurate way enables the trades to do their work and stay on schedule. We all win.” As Gerber and the other surveyors at Clark Builders have continued to push the limits of the iCON solution, they have discovered other advantages. For example, the ease of laying out surfaces and slope lines has enabled the team to pursue increasingly complex projects. “It’s so much easier to do advanced work with angles and curves,” Gerber said. “It’s given us a huge boost of confidence.”

With the increasing digitization of the building construction industry, companies that are fast, accurate and innovative will emerge as the leaders in delivering the projects of the future. Clark Builders’ forward-thinking approach through its investment in intelligent digital layout positions the firm ahead of the curve.

“Technology isn’t going away, and it’s incredibly powerful when it’s used properly,” said Gerber. “Our approach is to embrace the technology and learn from it, and don’t look back.”